Would you like to see the safest way that you can lose your money? This is a discussion of Product versus Strategy. Often people will forget strategy; instead, they are just thinking product. I see this in full-page ads from brokerage companies that say, “Get a 4% certificate of deposit,” or I will sometimes see this also advertised outside of a Representative or Financial Advisor’s office.

Let's have a discussion on how that 4% certificate of deposit might actually play out. If I had a 4% rate of return, the first thing I have to take into account is that I'm going to have some taxes that will be due. Let’s just for simplicity's sake that you're in the 25% tax bracket between federal and state. That 25% or a quarter of four percent, which would be one percent. If I subtract out that one percent, the number I have leftover is a three percent annualized rate of return, but it does not stop there.

Again, this is a product discussion. We were looking at four percent, which is now three percent, after taxes. But, it's really a strategy discussion as well, because I have other factors that are pushing against this rate of return. The most important right now would be inflation. Let's say this last years’ inflation was eight percent.  Forward-thinking for the next year, let’s say it's going to be eight percent again. I have to dilute my rate of return based on that negative eight percent. So, if I take my remaining three percent and I take away the eight percent inflation, what do I have left over? I actually have a negative 5% rate of return if I take into account taxation and if I take into account inflation! 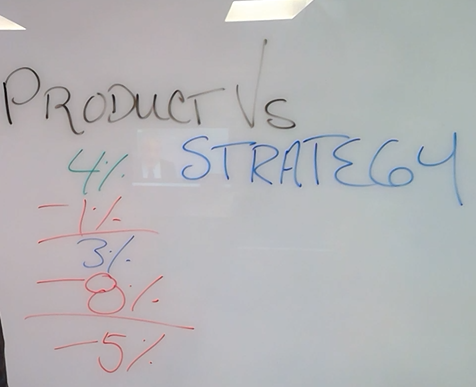 Markets can go up and down. Inflation can go up and down. Taxation can go up and down, though most people complain that it keeps on going up. Here's the thing: you could be chasing a four percent rate of return and actually at the end of the day because of the push-back from inflation and taxation with your four percent actually becoming a - 5%. So, here's the question: are you chasing after ‘product-thinking’ or do you have a ‘strategy’ in place? If you want a strategy in place, the question is: What is that strategy? If you don't know what that strategy is, perhaps it's time for you to schedule your Financialoscopy.