Don’t Open Your Statements, Yet.

It's very important that I provide some perspective right now because a lot of people may be upset. They’re upset because they've been looking quarter-to-quarter-to-quarter at what is going on in the market, and they’re wondering if their negative statements will ever turn around. I want you to know first of all, when I look at money, that money that may seem to be no longer there because there have been decreases this year in the market, that we see the possibilities and the dreams that some people have shared with us also decrease. We start seeing that some of those dreams might become less and less of a reality. We do know that with time, in the past, the market has always come back, but I think it's important to have a perspective on what is really going on right now. These are things that we talk about on a regular basis here at the office. We run numbers continually. We look at Excel spreadsheets. We are running calculations through software from “Morning Star” and other programs, as well. When we look at the actual numbers, I want to show you the perspective that we are seeing. 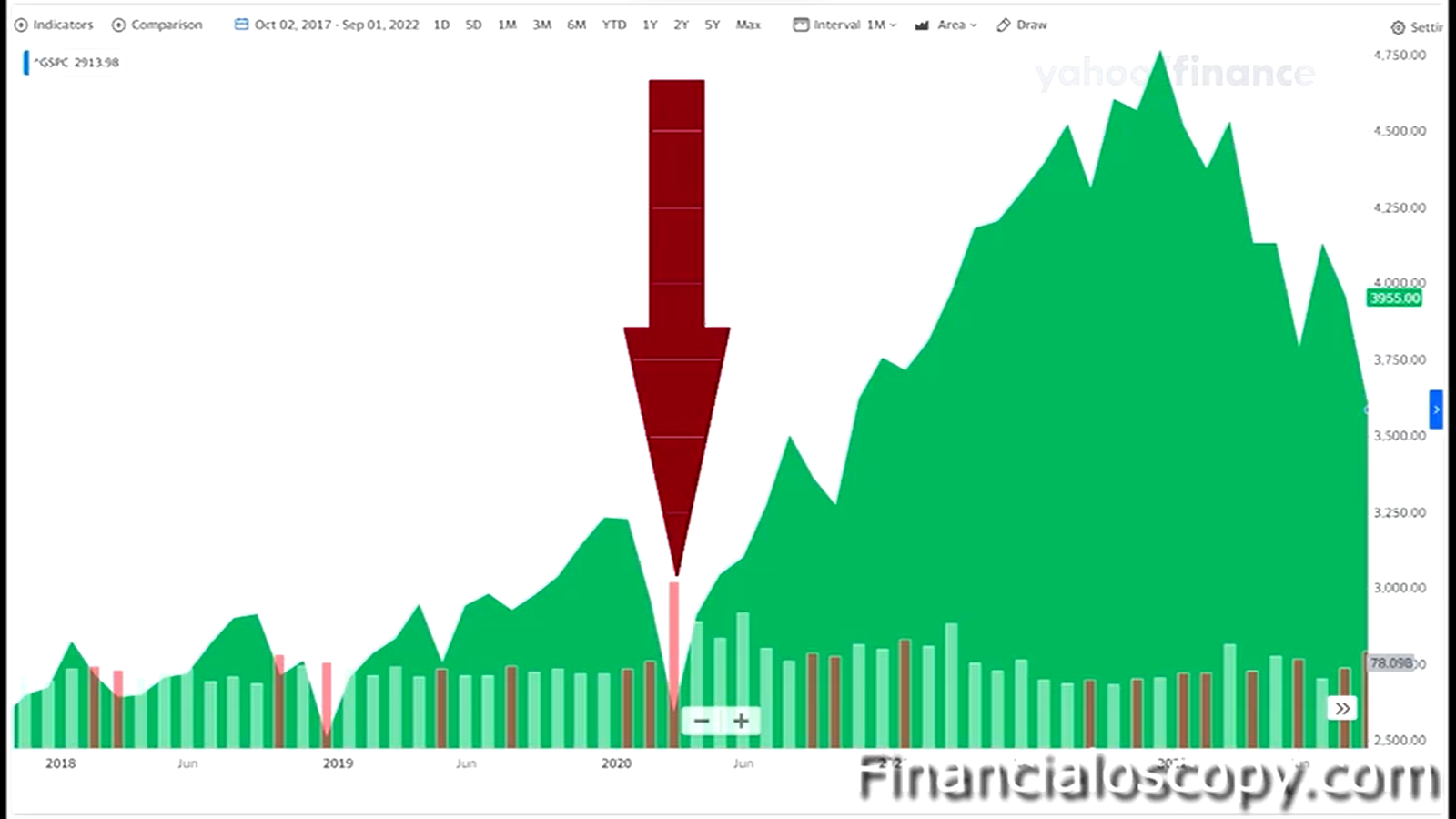 Here is a chart showing the S&P 500 and its’ performance going from 5 years ago to today. You can see that everything was going fine and dandy until the pandemic occurred and then precipitously the market fell. Already, some people have forgotten that a pandemic occurred just two years ago because of what happened worldwide to boost up the economy of the nations; the new president and then also the next president of the United States took action. This is not bashing anyone. I don't care if you were pro-Trump or if you were pro-Biden because both presidents and many leaders of the Free World pushed huge amounts of money into their economies.

My own parents who at the time were in their mid-80s, collecting Social Security and living on a pension and living off their 401ks, and were doing just fine, but they also got free money from the United States government. In fact, even they said to me, “We don't need this money.” Instead, they decided to give it to one of their favorite local charities as a lot of people did during that period of time. A lot of businesses did that too, but there was still this huge influx of money that went into the market.

Look again at the chart. You can see all this money being pushed into the economy during a period of time that people were actually holding back on spending. So, what did they do with that money? They put it into the market. They put it into their savings. Then, during a period of time a person had a difficult time getting lumber because stores like Menards and Home Depot were basically selling out of products. All of a sudden people had all this money and all these projects that they had always wanted to do, and they pushed the market up with all of their spending. They pushed the economy to keep on going under a worst-case scenario. Take a look at the chart again: can you see the precipitous drop when the pandemic occurred? Can you see what happened after that? The economy, even though it was somewhat questionable, went up with all the money going into the economy on a worldwide basis, and it basically overshot everything else. 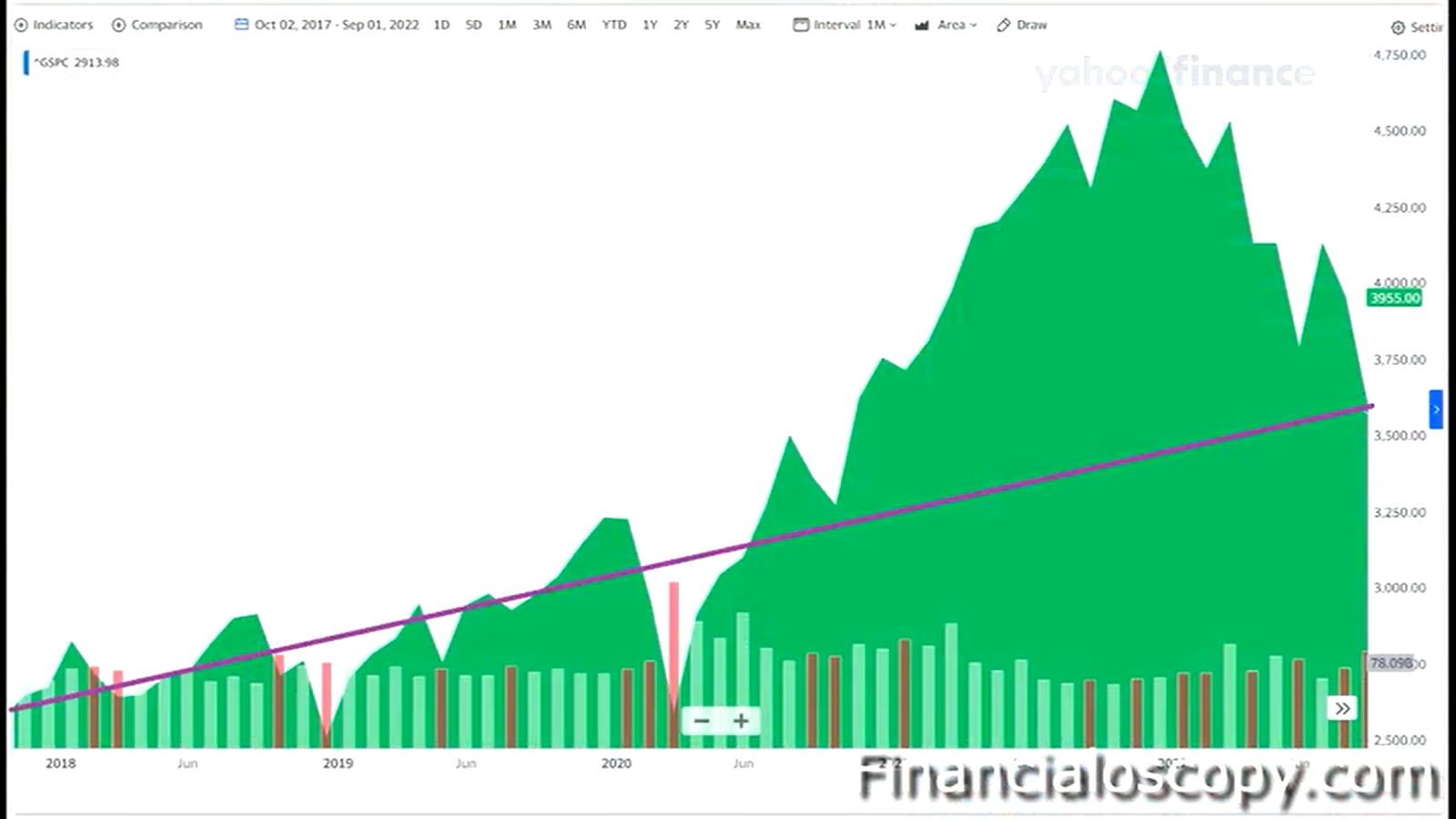 Now take a look at the chart again. What I am showing you here is that I put in a fake line from beginning to end over the period of the last five years. Here's what's important: had the pandemic not happened, had we not had that drop, had we not had that great increase, had we had this fake line that didn't happen, there was no promise it would have happened (it's just a line that I created), had we had an average rate of return over the period of the last five years, the S & P 500, without dividends being applied, would have had an annualized rate of return in excess of 8%. With that being said, what you are seeing now is a recalibration. A recalibration because all of a sudden we are in an inflationary period. The Fed is raising rates to try to get companies to actually pull back. You are now seeing the drop back down to the Mean. Back down to reality.

The reason that I'm sharing this with you today is because you may only be looking at a short period of time: let's say, since the beginning of this year-2022. There has been a drop since the beginning of this year, but what I am trying to have you focus on is the big picture. The big picture here is the last 5-year period of time. Now, unless you need money this very instant, you shouldn't worry about the money that's in the market. With time, it has always corrected itself. With time, it plays itself out. With time, that's what has always happened.

If you need that money immediately, it should not have been in the market anyway. It should have been someplace where it was safe, sound, and secure. You should always have an emergency fund of about 6-to-12 months of income, if you’re working. When you're retired, you should have maybe about a 3-year emergency fund so that you can deal with these ups and downs that play in the market from time-to-time. Again, look at the chart. You can see how things played out. You can see how the pandemic decreased the market. You can see how money went into the market, and how it exploded the stock market at that point in time. Now, we are returning back to the norm.

What's going to happen in the future? I don't know. Nobody does. That's why it changes on a day-to-day basis, up and down. What I do know is that with time, if you have the fortitude, if you don't need your money right now, you can allow the market to play itself out. In the past, it has always played-out based upon what the realities of the current situation are. The reality of the situation is that if the companies that you have purchased through your individual Investments are good, strong companies today, and if they have the right products, and if they have the right services and are doing the right thing, then they should be here tomorrow.

Perspective. Now you can go ahead and open that 3rd quarter statement. As always, if you need some help and hand-holding along the way, feel free to reach out. We would love to be in contact with every single one of our clients. That's very difficult with the hundreds and hundreds of families that we work with, but reach out, as we reach out too. We would be happy to walk this road together with you, so you can feel comfortable with your own individual future.

Thank you so much for your time.